Q:  Wait a minute!  Your new book is called "The Redemption of Pontius Pilate." Does that mean that Pilate was actually saved?

A:  First of all, I would like to point out that this book is a novel - a work of fiction.  The fact is, no one knows exactly what happened to Pontius Pilate.  There are three traditions that are preserved about his fate - one says that Pilate slowly went mad after the trial of Jesus; washing his hands over and over again and mumbling "The blood . . . the blood."  Another says that Pilate committed suicide because he had been recalled to Rome for incompetence and did not want to face the wrath of Tiberius Caesar.  The last tradition, preserved in the Eastern Orthodox Church, says that Pilate became a believer and was martyred for his faith.  All three of these traditions originated about 200 years after the New Testament era, so there is no way of knowing how accurate they might be.
Pontius Pilate is an enigmatic character.  There are only a few contemporary sources of historical information about him: the four New Testament Gospels, and the works of two Jewish historians: Flavius Josephus and Philo of Alexandria.  All those accounts focus strictly on his ten year stint as Prefect (Governor) of Judea.  There is no reliable information about what he did before his posting to Judea or what happened to him afterward, and the sources are wildly split on what kind of man he was: the Gospels present him as a relatively decent, if harsh, man who tried to render a just verdict but was frustrated by local resistance; while the two Jewish sources portray him as a cruel, corrupt, and incompetent governor who was vicious and oppressive in his treatment of the Jews.
For the sake of my story, I assumed that all the sources were basically correct in their records of Pilate's actions.  It was in deciding on his motivation for those actions, as well as furnishing a backstory of his early life, and describing his final fate, that I used some artistic license - although I wove his life in very closely with that of the Emperors of Rome he served under, especially the reclusive and bitter Tiberius Caesar. Most of the events I describe in Rome and Germania, before Pilate was sent to Judea, really happened. I could not help but think that presiding over the trial of Jesus was a life-changing event for Pilate, and tried to imagine how that might have played out in his last years. In the process, I hope I wrote a good story, and one that answers the question that I posed on the book's back cover: "Is any man too lost to be saved?"

THE REDEMPTION OF PONTIUS PILATE will be released on Tuesday, May 19 and will be available from my publisher, www.electiopublishing.com, as well as on www.amazon.com and www.barnesandnoble.com.  I have my first official signing scheduled at Hastings bookstore in Greenville on June 6, 2015.

PS If you buy directly from my publisher I get more money! (just sayin') 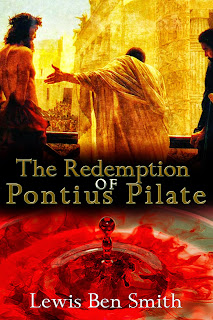