Three years ago today, I finished the first draft of my first novel, THE TESTIMONIUM.  I was a history teacher and pastor with aspirations of becoming a published author, but I had no idea if those dreams would come true or not.  Honestly, all I knew at that moment was that I had written a book that I was proud of.  It took me over a year to finally find a publisher that was willing to take a chance on a complete rookie - I mean, a real royalty publisher, not a vanity press that wanted to charge me money to print my book.  I will forever be grateful to Jesse Greever and Chris Dixon, the wonderful team at Electio Publishing, who were willing to pick up a manuscript from a first time author.  I signed my contract with them in February of 2014.
By the time THE TESTIMONIUM was published, I was putting the finishing touches on my second novel, THE REDEMPTION OF PONTIUS PILATE.   Once the contract for my first book was signed and the release date granted, I sent them the next one.  To my joy and wonder, they liked it too!  It was released about nine months after THE TESTIMONIUM, in May of this year.
But it's funny how writing gets under your skin.  PILATE was a historical novel, set in the First Century, linked to THE TESTIMONIUM only by the letter Pilate wrote to Rome about the Crucifixion of Jesus, which my modern-day archeologists had discovered in the first book.  But in my mind, I kept going back to that first set of characters I created - Josh and Isabella, Father Duncan and Luke Martens, with his young wife Alicia.  What happened to them after their remarkable discovery on the Isle of Capri?
So even as THE TESTIMONIUM was about to be released, I was hard at work on its sequel, MATTHEW'S AUTOGRAPH.  In it, my team returns for yet another adventure.  This time the lovely Isle of Carpi is traded for the sands of the Negev Desert, and instead of a writing chamber, what they find is a tomb.  Not just any tomb either, for the ossuary that blocks the entrance is inscribed with a name familiar to every Christian:  "Matthew Levi, beloved scribe of his Lord."  Now in one week, this sequel to THE TESTIMONIUM will be available on Amazon, Barnes and Noble, and ITunes, as well as a number of other online distributors.  If you liked THE TESTIMONIUM, you will love MATTHEW'S AUTOGRAPH!

Now, for those who haven't read any of my stuff yet, I'm going to introduce the main characters here below and tell you a little bit of what they have been up to since they left the Isle of Capri.  First of all, there is Father Duncan MacDonald. A trained archeologist as well as a Catholic priest, he is employed by the Vatican as an archeological consultant, especially on sites that have some Biblical relevance.  He makes the initial discovery of St. Matthew's tomb in the Negev.  Then we have Joshua Parker and his wife, Isabella Sforza-Parker and their son, Giuseppe, who prefers to be called "Joey."  Josh is the son of a Baptist pastor and a professional Biblical archeologist.  He and Isabella met on Capri, where she was the supervisor of the dig that uncovered Pilate's "Testimonium" a few years before.  Romantic sparks flew between them immediately, and now they are married, living in America. and longing for a return to archeological field work after spending the last two years on a book tour.  Then we have Dr. Luke Martens, Josh's friend and mentor and a renowned classical archeologist in his own right.  He and his beautiful wife Alicia, an aspiring marine biologist, are also called in to help Father MacDonald excavate this remarkable discovery in Israel.
Full of danger, intrigue, romance, and potentially earth-shattering discoveries about the truth of the Gospel accounts, MATTHEW'S AUTOGRAPH is a fun, fast-paced Christian adventure story for readers of all ages!  Here is the short blurb I wrote for the back of the book . . .

It was supposed to be a simple bit of salvage archeology for Father Duncan MacDonald, the Vatican archeologist:

Check out an empty cave uncovered in the Negev Desert by an Israeli construction crew, to see if it had any archeological significance.  But then a false wall in the back of the cave revealed a basalt ossuary, inscribed with the name of "Matthew Levi, Beloved Scribe of His Lord."  Behind the ossuary - an ancient tomb with a human skeleton and a sealed jar.

Finding the undisturbed tomb of one of the Apostles of Jesus leads the Israeli government to call in Duncan’s companions, the famous “Capri team” who had discovered the Testimonium of Pontius Pilate three years before.  When the three archeologists arrive in Tel Aviv, they discover an amazing document inside the tomb: the end of Matthew’s Gospel, written in the Apostle’s own hand!

Their excitement turns to perplexity when they translate the scroll and find the text varies drastically from every copy of the Book of Matthew in existence.  Have the New Testament Gospels been altered with since they were written? Has this tomb really lain undisturbed for two thousand years?  Is this ancient manuscript really . . . 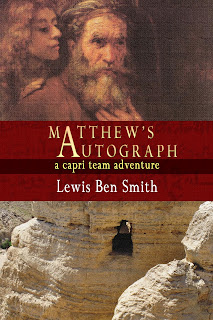