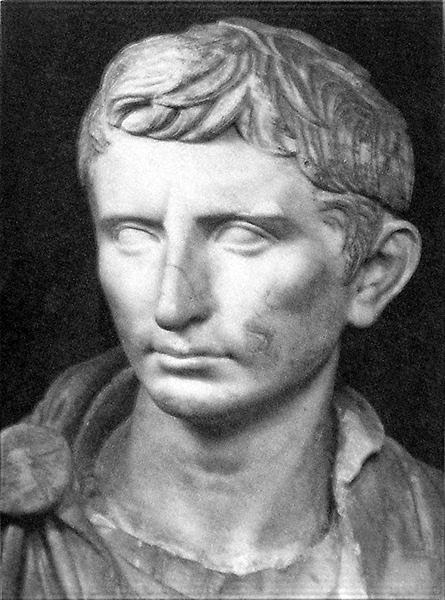 DO YOU KNOW THIS MAN?
His full name is Gaius Octavius Julius Caesar Augustus, but today we remember him simply as Caesar Augustus. 2014 years ago, he was the most important man on earth. He created the Roman Empire, ending 100 years of civil war that had torn the Republic apart. He avenged his adoptive father's death at the hands of a cabal of Senators, and defeated the most popular man in Rome, Mark Antony, in order to seize supreme power. He took over a dysfunctional Republic and made the government run like a well-tuned engine. He expanded the Empire and then made peace. Four times he was able to extinguish the fires in the Temple of Mars, signifying that Rome had no foreign conflicts going anywhere. He boasted that he "found Rome a city of brick and left it a city of marble." Poets sung his praises; sculptors vied to create images of him; and a grateful Senate named him "First Citizen of Rome."
Yet today he is primarily remembered for a single verse in the Gospel of Luke: "Now there went forth in those days a decree from Caesar Augustus, that all the world should be taxed . . ."

I wonder if Augustus, in his wildest dreams, ever imagined that a child born to a destitute teenage mother in a barn surrounded by livestock, cradled in a feed trough, in a tiny village of the most insignificant province of his Empire, would become King of Kings and Lord of Lords? That history would be split in two at that moment? That he would become a mere footnote in the story of the carpenter from Galilee who would change the world in a far more lasting way? Angels sang at His birth, and the whole earth trembled at his death. The glory of Augustus is but a memory for historians, but the glory of the Lord of Hosts endures forever and ever.